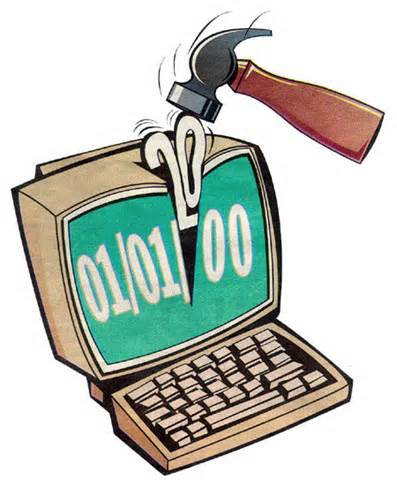 Many religious leaders and organizations are looking for the world’s conversion and a millennium of peace to begin. The Pope and several evangelical Protestants are working towards a unified position and witness to present to the world. Anyone who is out of step will not be considered Christian because they are not willing to see the prayer of Christ as recorded in John 17 answered.

The most common thought among the people of the world regarding the year 2000 is what is known as the “Y2K” problem. Only those in a time warp have not heard about it. Y2K stands for the “year 2000.” It involves the possible shutdown of computers that were programmed with only a two-digit year dating system instead of a four digit year dating system.

The troubles that could be associated with the Y2K problem have been discussed quite a bit for the last few years. Since almost everything is computer driven and controlled today, if the computers come to a standstill, society will also. As someone said, “It would be like going back to the horse and buggy days without the horse and buggy!”

While banking and communications were the early targets of concern, the biggest fear today centers around the electric power plants. If they shut down everything else shuts down including computer-controlled systems that are Y2K compliant.

Computer “experts” seem divided on how many and what types of systems will be ready by the end of the year, but all seem to expect some problems. A few believe that the main “bugs” will be worked out by then; some believe that total chaos will occur at the stroke of midnight! How should we approach the problem?

If I were to tell you that there would be no problems with Y2K and you made no preparations and then chaos occurred, I would be, to a degree, responsible for your situation. I could take the view that total shutdown will occur. If the system fails then, I would look like a prophet. If total shutdown did not occur I could say that God in His mercy gave us more time and at least you were not hurt by being ready. The truth is that while I have my ideas about Y2K, I do not claim to be an authority or have the answers.

Some have said that there are too many of the “Big Boys” who wish for normal life to prosper and continue when the year 2000 comes to let things crash. Perhaps this is so. I do know that the technical answers to the problem exist. Implementation may not be as easy. One of the first places the Y2K bug showed up was in using credit cards that had expiration dates in the year 2000. Interestingly it did not take the banks very long to clear up this problem. Money still talks! Although at last report few if any banks were totally Y2K compliant, they claimthey are working on it and plan to be ready by year’s end.

I have believed for years that it is important to get out of the cities and move into the country to live. If we do not get out of the cities now we may not be able to later. Many who live in metropolitan areas and rely on public transportation could not leave in the event of a power outage. Some have automobiles but you cannot drive your car without gasoline. Gasoline cannot be pumped and sold without electricity.

For those in the country there would be three main necessities: water, food, and shelter. The biggest concern would be fresh water. Those who depend on city water supplies or for electricity to pump water from wells will be without water if the electric power fails. Springs or wells that could be hand drawn can supply water. Food would be the next biggest concern. Personally, I plan on the biggest garden I have ever planted this year. Food should be canned or dried but not put up in freezers for obvious reasons. Another necessity is dry shelter and, where climate necessitates, warmth is important. Wood-burning stoves may work well to produce heat for some, but remember, chain saws use gasoline. Getting the wood in early and having several tanks of fuel on hand would be important. Other heat sources could be coal or liquid propane as well as solar heat and power.

There is a certain amount of preparation that needs to be made even if the Y2K bug is fixed. As we noted earlier, it is imperative that we get out of the cities. According to prophecy there is coming a time of trouble in this world, both physically and spiritually, such as has never yet been seen. Some have suggested that the powers that be will use Y2K to start a national emergency and declare marshal law starting the final movements of earth’s history. With the current track record of President Clinton combined with his upcoming Senate trial and the problems with Iraq, this is not a “far fetched idea.”

One thing we can know for sure, if it is time for history to close, nothing will stop its onward march. The signs tell us that we are near the coming of Jesus in the clouds of heaven. If the year 2000 is not the end it is certainly the beginning of the end. The question that should haunt us is: “Are we making the preparation necessary for the end times?” Proverbs 22:3 says, “A prudent man foreseeth the evil, and hideth himself: but the simple pass on, and are punished.”

While there are physical preparations that all Christians should be making for either Y2K or the time of trouble, the most important preparation is the spiritual life. While we have a work to do (physically and most importantly spiritually) in getting ready for the times ahead, there is a world to warn of coming destruction! The Lord is not pleased with a self-centered program of self-preservation. I pray that we would not become so engrossed with the coming problems that we fail to give the message God has commissioned us to give. I believe that if we are about our Father’s business He will see that our preparations, which are necessary, will be completed.

Whatever is ahead let us above all be faithful. “And the Lord said, Who then is that faithful and wise steward, whom his lord shall make ruler over his household, to give them their portion of meat in due season? Blessed is that servant, whom his lord when he cometh shall find so doing.” (Luke 12:42, 43)