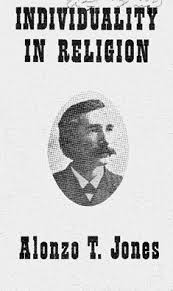 n the nature of things there is no rightful room for the domination of others in the life and affairs of the soul of the individual person. This is peculiarly and supremely the realm of God alone, who created man in His own image and for His own glory; and who created each person individually and personally responsible and answerable to Him alone.

Yet man, sinful and unruly man, has never been willing to allow God to have His place in and with the soul of the individual man; but has always been ambitious and ready to claim that place for himself, and by every means and contrivance possible to make this claim effective. History itself, as it relates to general principles and not to details, is hardly anything else than a succession of attempts upon the grandest possible scale to make successful this arrogant claim of sinful and unruly man in the place of God to dominate the souls of men. And no grander demonstration that there is a divinity striving hard to shape the destiny of mankind could ever be asked or given than from the day of Abel until now is given in the perpetual heroic assertion and maintenance of this perfect liberty of the individual soul by the individual person against the subtlest pretensions and mightiest combinations of force and power that this world could possibly contrive. From Nimrod to Nebuchadnezzar and from Nebuchadnezzar until now the course and energy of empire have been bent and exerted to this one thing. And through all that time such splendid individuals as Abraham, Joseph, Moses, Daniel and his three brethren, Paul, Wyckliff, Huss, Militz, Matthias, Conrad, Jerome, Luther, Roger Williams, and multitudes unnamed, and over all Christ Jesus, by divine faith have sublimely stood alone with God, absolutely alone so far as man is concerned, for the individuality, and in that the liberty, of the soul of man; and for the sovereignty of God alone in and over the realm of the soul.

The Empire of Babylon embraced the civilized world, as the world then was. Nebuchadnezzar was monarch and absolute ruler of the empire. “Thou, O king, art a king of kings; for the God of Heaven hath given thee a kingdom, and power, and strength, and glory. And wheresoever the children of men dwell, the beasts of the field and the fowls of the heaven hath he given into thine hand, and hath made thee ruler over them all.” (Daniel 2:37, 38)

In His own providential purpose God had made all nations subject to the sway of King Nebuchadnezzar of Babylon. (Jeremiah 27:1-13) In the form and system of government of Babylon the authority of the king was absolute. His word was the law. In this absolutism of sovereignty King Nebuchadnezzar assumed that he was sovereign of the souls, as well as the bodies, of the religious life as well as the civil conduct, of those who were subject to his power. And since he was ruler of the nations he would be ruler in the religion, and of the religion, of the nations.

Accordingly he made a great image, all of gold, about ninety feet tall and nine feet broad, and “set it up in the plain of Dura, in the province of Babylon.” (Daniel 3:1) Then he summoned from the provinces all the officials of the empire to the dedication and the worship of the great golden image. All the officials came, and were assembled and stood before the image.

“Then an herald cried aloud, To you it is commanded, O people, nations, and languages, that at what time ye hear the sound of the cornet, flute, harp, sackbut, psaltery, dulcimer, and all kinds of music, ye fall down and worship the golden image that Nebuchadnezzar the king hath set up; and whoso falleth not down and worshppeth, shall the same hour be cast into the midst of a burning fiery furnace.” And as the instruments of music sounded forth the grand signal for the worship “all the people, the nations, and the languages, fell down and worshipped the golden image.” (Daniel 3:4-6)

But in the assembly there were three young Hebrews who had been carried captive from Jerusalem to Babylon, but who had been appointed by the king, officials “over the affairs of the province of Babylon.” These neither bowed nor worshipped, nor otherwise paid any particular attention to the proceedings.

This was noticed, and excited accusation before the king. “There are certain Jews whom thou hast set over the affairs of the province of Babylon, Shadrach, Meshach, and Abednego; these men, O king, have not regarded thee: they serve not thy gods, nor worship the golden image which thou hast set up.” (Verse 12)

Then the king “in his rage and fury” commanded that the three young men should be brought before him. This was done. The king himself now spoke to them personally and direct: “Is it of purpose, O Shadrach, Meshach, and Abednego, do not ye serve my gods, nor worship the golden image which I have set up?” The king himself then repeated the command that at the sound of the instruments of all kinds of music they fall down and worship, and if not, they were to be cast “the same hour into the midst of a burning fiery furnace.”

But the young men quietly answered: “O Nebuchad- nezzar, we are not careful to answer thee in this matter. If it be so, our God whom we serve is able to deliver us from the burning fiery furnace, and he will deliver us out of thine hand, O king. But if not, be it known unto thee, O king, that we will not serve thy gods, nor worship the golden image which thou hast set up.” (Verses 14-18)

The issue was now clearly drawn. The sovereign of the world’s power had personally issued his command direct to the three individuals; and from them he had received answer as direct, that they would not conform. This was conduct, and these were words, such as the king in his absolutism of power had never met before. There was therefore a personal as well as an official resentment aroused in him; and he was so “full of fury” that “the form of his visage was changed against” the young men, and he commanded that the furnace should be heated seven times hotter than usual; and that “the most mighty men in his army” should bind the young men and cast them into the midst of the roaring furnace.

They assured him that this was true. But he exclaimed, “Lo, I see four men, loose, walking in the midst of the fire, and they have no hurt; and the form of the fourth is like the Son of God.” (Daniel 3:25)

Then the king went near to the mouth of the furnace and called to the men by name and said, “Ye servants of the most high God, come forth and come hither.” And they “came forth of the midst of the fire. And the princes, governors, and captains, and the king’s counselors, being gathered together, saw these men upon whose bodies the fire had no power, nor was an hair of their head singed, neither were their coats changed, nor the smell of fire had passed upon them.

“Then Nebuchadnezzar spake, and said, Blessed be the God of Shadrach, Meshach, and Abednego, who hath sent his angel and delivered his servants that trusted in him, and have changed the king’s word, and yielded their bodies, that they might not serve nor worship any god except their own God.” (Daniel 3:26-28)

Therefore it would be impossible more plainly to show that the Lord, in commanding the people to be subject to the king of Babylon and to serve him, had never either commanded or intended that they should be subject to him or serve him in the realm of religion.

By this unmistakable approval of the course of the three men, and this signal deliverance of them, the Lord made perfectly plain to the king that his command in this matter was wrong: that he had demanded a service that he had no right to require: that in making him king of the nations the Lord had not made him king in the religion of the people: that in bringing him to be head of all the nations, peoples, and languages, God had not given him to be head of the religion of even a solitary individual: that while the Lord had brought all nations and peoples under the king’s yoke as to their political and bodily service, this same Lord had unmistakably shown to the king that he had given no power nor jurisdiction in any way whatever as to their soul’s service: that while in all things between nation and nation, and between man and man, all peoples, nations, and languages had been given to him to serve him, and God had made him ruler over them all; yet with the relations between each man and God the king could have nothing whatever to do: and that in the presence of the rights of the individual person, in conscience and in worship “the king’s word” must change, the king’s decree is naught: that in this the king even of the world is only nobody, for here only God is sovereign and all in all.

And for the instruction of all kings and all people forever, all this was done that day, and it was written for our admonition upon whom the ends of the world are come.